The glory of the Lord falling on the streets of London


There is water flowing in dry riverbeds. That which has been divided will be joined. There will be reconciliation. Small fires will join to make a great fire. 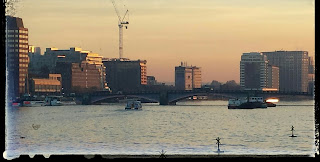 I was walking from my house in Brockley to the centre of London on one of my regular routes. I had decided to change my route to pass through Camberwell and Kennington. As I was walking through Peckham this Godfrey Birtill song began to run through my mind.

At about that time a friend sent me this prophecy.

I texted back to say that I was walking through Peckham, Camberwell and Kennington with the song going through my head. The line that had most relevance was ‘the glory of the Lord is falling in the streets’ and the line kept coming back and back and back to my mind.

Often when the Spirit touches me and I speak out I also cry (its very inconvenient) as I was walking I felt the Spirit come on me, and tears came to my eyes. I could see in my minds eye the glory of God falling on the streets. I was now in the area between Kennington and Vauxhall. I texted my friend to explain what was happening and she began to pray for more of the Spirit to move on me.

I walked through Vauxhall Gardens and onto the bank of the Thames. From there I could see the MI6 and MI5 buildings, I was walking past buildings that are used by the Police and I was close to the buildings used by the National Crime Agency. I could see Parliament in front of me. The Lord said that all of this was irrelevant to what He was doing. A man in a suit carrying a briefcase walked past me and the Lord repeated that the contents of the briefcase were pointless.

As I came closer to Parliament I came to Lambeth Palace, it seemed as if it was in clearer light or clearer air than the buildings surrounding it. I crossed the road intending to go into St Mary’s church bit it was closed for building works. I felt in my spirit as though I was walking in the right direction although I had intended to walk along the South Bank. I carried on south.

I had been thinking earlier about the possibility of doing some kind of praise walk. I had also noticed that my knees and my right foot were hurting. I had thought to myself that if I was going to do something like a praise walk God would need to give me the strength to do it. I got to a street corner and the Spirit told me to turn left. As I did so I caught sight of the name of the street I was now walking down, Hercules Road. It was as though the Spirit was saying ‘you already have the strength.

I came to the end of the road opposite the headquarters of a national Christian organisation that has taken potentially controversial theological positions. The words that came in the Spirit were for them ‘Preach the gospel, preach the salvation of our God’. I stood for a while praying those words and the song in my head changed ‘Come Lord Jesus Come’.

Walking past Waterloo station I walked past some Jehovah’s Witnesses and felt for a few seconds as though I had a wake like a boat that was spreading out and washing over the banks around me. When I texted this to my friend she replied that she had seen golden waves* moving out from where I walked and had felt the vibration of it personally.

I went into a nearby church; my intention was to share what I was seeing. There were a group of musicians in there practicing some modern classical music. The sort that needs lots of different drums, with disjointed rhythms and strange chords, all really just a noise. There was also a lady off to one side with an oboe who was doing something with her reed and was making a noise like a small duck.

1 Shout it aloud, do not hold back. Raise your voice like a trumpet. Declare to my people their rebellion and to the descendants of Jacob their sins.
2 For day after day they seek me out; they seem eager to know my ways, as if they were a nation that does what is right and has not forsaken the commands of its God. They ask me for just decisions and seem eager for God to come near them.
3 ‘Why have we fasted,’ they say, ‘and you have not seen it?  Why have we humbled ourselves, and you have not noticed?’ “Yet on the day of your fasting, you do as you please and exploit all your workers.
4 Your fasting ends in quarreling and strife, and in striking each other with wicked fists.  You cannot fast as you do today and expect your voice to be heard on high.
5 Is this the kind of fast I have chosen, only a day for people to humble themselves? Is it only for bowing one’s head like a reed and for lying in sackcloth and ashes? Is that what you call a fast, a day acceptable to the Lord?
6 “Is not this the kind of fasting I have chosen: to loose the chains of injustice and untie the cords of the yoke, to set the oppressed free and break every yoke?
7 Is it not to share your food with the hungry and to provide the poor wanderer with shelter— when you see the naked, to clothe them, and not to turn away from your own flesh and blood?
8 Then your light will break forth like the dawn, and your healing will quickly appear;  then your righteousness will go before you, and the glory of the Lord will be your rear guard.
9 Then you will call, and the Lord will answer; you will cry for help, and he will say: Here am I. If you do away with the yoke of oppression, with the pointing finger and malicious talk,
10 and if you spend yourselves in behalf of the hungry and satisfy the needs of the oppressed, then your light will rise in the darkness, and your night will become like the noonday.
11 The Lord will guide you always; he will satisfy your needs in a sun-scorched land and will strengthen your frame. You will be like a well-watered garden, like a spring whose waters never fail.
12 Your people will rebuild the ancient ruins and will raise up the age-old foundations; you will be called Repairer of Broken Walls, Restorer of Streets with Dwellings.
13 “If you keep your feet from breaking the Sabbath and from doing as you please on my holy day, if you call the Sabbath a delight and the Lord’s holy day honorable, and if you honor it by not going your own way and not doing as you please or speaking idle words,
14 then you will find your joy in the Lord, and I will cause you to ride in triumph on the heights of the land and to feast on the inheritance of your father Jacob.”
For the mouth of the Lord has spoken.

I stayed to pray in the church for a few minutes. As I was walking away the Spirit said “Its time to clean My House”

I came out on to the bank of the Thames and sat down feeling the Spirit lifting his hand from me. As I got up to finish the walk the Spirit said that there was one more thing that He wanted me to see.

My eyes fell on a tug pulling a rubbish barge down the Thames towards the sea and at the same time I saw the dome of St Paul’s, in the Spirit the two were connected as though the Lord was saying I am going to take out the rubbish. As I stood watching this there was a sudden strong wind blowing against my back.

Other posts similar to this