In September 2008 I had a two part vision of whirlwinds/tornado's and believe this is linked into a warning of a two phase recession/economic meltdown.

Last week however received an email about a prophecy given in 1987 given by a David Minor and the words resonated in my spirit and ties in with what I believe is a call to holiness.  Using a saying from Bob Sorge - holiness being our proximity to the throne of grace.  The more time we spend in the prescence of God, the more we are radiated with HIS holiness.


The two visions and the word from David Minor are below. 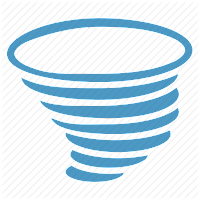 Clear expanse of farmland, very open and in full harvest (bright skies, warm etc), a post-card picture of peace and tranquillity.  Looking up I saw coming towards me a tornado - immense and travelling at great speed.  The tornado almost appeared to be odd shape as the base of the tornado seemed disproportionate in size to the funnel at the top.  The base covered a huge expanse of space.  I did not have a sense of fear.

About an hour later: