Knock and the door WILL open 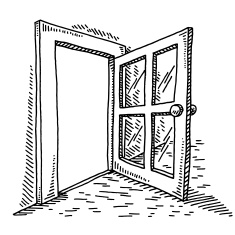 God is amazing! (17/11/2011) Our little home group in SE London experienced a wave of Holy Spirit washing over us - everyone prophesying, praying for each other, singing spontaneously with a download of visions, words and scripture.

A pertinent vision is one that relates to the time of waiting that many of us have found ourselves in - the vision came with a door swinging open with the open doorway filled with the radiance of Christ ...... And a deep assurance for those who have been in a place of waiting and/or transition and have kept their focus on Christ, the door to the new day is about to open. Jesus's words echo through time ..... "Knock and the door shall open"

Wake up, wake up, O sleeper. Stand up and unite.

The time is short.  You have all the power given to you. Come to me in prayer, I have limitless resources.  Wake up, wake up, it is time to stop talking about things but to take action.  I am waiting for you to partner with me in the work.

Then a picture of Moses with his arms raised holding his staff, so the Israelites could win their battle.  This representing our role in the heavenly battles as we pray and get involved, battles can be won and we can see God’s kingdom established in our area.

God is not as impressed or concerned about human dates and numbers as we are! (Y2K, 11.11.11 etc) But nevertheless, the anointing of the Holy Spirit did fall on a date 50 days after Jesus death and resurrection at PENTECOST. God knows the seasons - Be in tune with the seasons of God as He is raising the people. Christians rising up, actively participating in His plan out of which streams of living water will flow.
Word compiled from an interpretation to two tongue's at house-group meeting 3 November 2011
at 00:22 No comments: